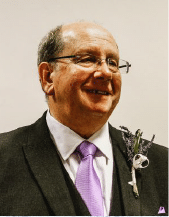 Alan was born in Guildford, Surrey, but grew up in Aldershot. He studied Mechanical Engineering at Farnborough Technical college graduating in 1969.

Alan changed career and toured the Middle East and Africa as a professional musician.

He found Christ in 1989 and has never looked back.

Alan married Joy in 1992 and studied at E.B.C. from 1993 to 1996. Along with Joy, he pastored at churches including Goldenhill and Rayleigh, before joining the pastoral team at both Silverdale, and later Glossop, his current church.